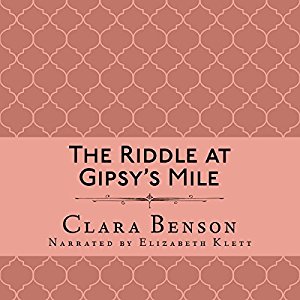 The latest Angela Marchmont mystery novel by Clara Benson is now available at Audible. The Riddle at Gipsy’s Mile is the third novel in this series that Elizabeth has narrated; the others are The Mystery at Underwood House and The Treasure at Poldarrow Point. The books in this excellent period mystery series have garnered many five-star reviews at Audible.

Lost in the mists of the Romney Marsh, Angela Marchmont stumbles upon the body of a woman whose face has been disfigured – presumably to prevent recognition. Who is she, and what was she doing out there in the middle of nowhere? The search for answers will take Angela from a grand stately home to London’s most fashionable – and disreputable – nightclub, and into a murky world of illegal drinking, jazz music, and lost souls.