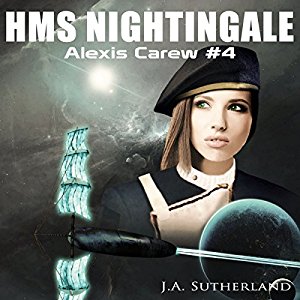 Alexis Carew fans, take note! The fourth book in J.A. Sutherland’s excellent SFF series is now available at Audible! Elizabeth has been enjoying narrating this series – about a young British female Naval officer in space – since 2015. Other books in the series include Into the Dark, Mutineer, The Little Ships, and the novellas Wronged and Planetfall. If you haven’t listened to Alexis’ adventures, find out what you’re missing by starting with Into the Dark.

For Lieutenant Alexis Carew, it should be the perfect assignment – a command of her own and a chance to return to her home star system.

What she finds is a surly crew, the dregs of every frigate and ship of the line to pass through on the way to the war’s front, a first officer who thinks the command should have been his, and colonial worlds where they believe a girl’s place is somewhere very different than command of a Queen’s starship. Add to that the mysterious disappearances of ships vital to the war effort and an old enemy who seems intent on convincing her he’s changed.

Then there’s the mongoose with an unnatural affinity for her boots.