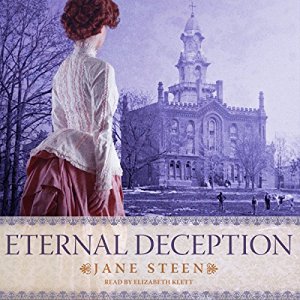 Elizabeth has another new release for you today: Eternal Deception, the second book in the House of Closed Doors series by Jane Steen – now available at Audible. (Elizabeth also narrated the first book, also available at Audible.) This excellent series follows fiercely independent Nell Lillington from Illinois to the Kansas frontier to try and make a new life for herself. Jane Steen skillfully blends historical fiction, mystery, and romance with a heroine that you will be sure to root for every step of the way. Elizabeth will be narrating the final book in Nell’s story, The Shadow Palace, which will be available in early 2017.

Love or independence? Few choices remain for Nell and her new family on the Kansas frontier.

Kansas, 1872. Unwed mother Nell Lillington hopes to support her daughter Sarah and friend Tess by working as a seamstress in an isolated seminary. When her only ally among the seminary’s leaders dies, she must choose between returning to her old life in Chicago and remaining in charge of her destiny.

As her talent as a dressmaker begins to win her commissions, Nell attracts the attention of two suitors: Reiner Lehmann, a wealthy senior student, and Judah Poulton, an impoverished professor. Shocking news from back home and another death at the seminary press Nell to make her decision. A disastrous winter journey, a treacherous game, and an impossible love could finally wrest control of Nell’s life out of her hands for good.

Eternal Deception is the second book in a series of engrossing historical fiction novels. If you like intriguing mystery, charming romance, and surprises you won’t see coming, you’ll love this story of one woman’s battle for herself on the 19th century frontier.