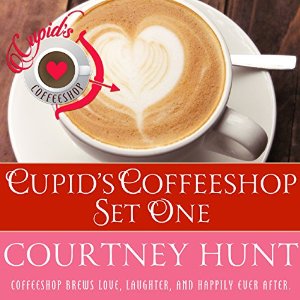 Elizabeth has a new release for you today: best-selling romance novelist Courtney Hunt‘s Cupid’s Coffeeshop series, set #1, which contains four novellas: Java Frost, Cupid’s Kiss, Lucky Latte, and Cherry Blossom Cappuccino. Ms. Hunt’s charming series provides a sweet and sexy romance for each month of the year, and this first set includes January through April. Elizabeth will be narrating sets #2 and #3 in the series, available later in 2016 and early 2017. She is also narrating Ms. Hunt’s Always a Bridesmaid series, which is in production now. The Cupid’s Coffeeshop series is tied together through the ongoing story of Patrick, Joe, and Zooey Lockhart, who inherit their grandmother’s coffeeshop – with the caveat that they have one year to make it profitable. If they don’t, they lose everything – including each other.

Make sure to head over to Audible and listen to the audio sample of this romantic new release!