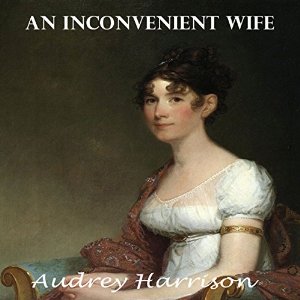 Elizabeth is excited to announce the release of Audrey Harrison’s An Inconvenient Wife, book 2 of the Inconvenient Trilogy. The first book in the series, An Inconvenient Ward, was released last month and has been getting great reviews. “The narration is outstanding with an excellent range of voice and tone, greatly improving the listener experience,” says an Audible listener. “Elizabeth Klett has a way to bring the regency period to life in her narrations.”

Although this book is part of a trilogy, each book is a stand-alone story in its own right.

Charlotte Webster thought she was eloping with the love of her life. She did not expect it to be a ploy and a way to force her way to a marriage with a stranger, who wanted an innocent bride. Held in a house of ill repute, there is little time to act to try and escape and few options to consider.

Lord Halkyn is a peer much in demand, but an expert at avoiding marriage. He has always had fixed ideas on love-it causes too many problems to be worth the trouble. He did consider marriage to one lady once, but it would have been a business transaction. Unfortunately for him, the lady in question had wanted to marry for love and had refused him. Rather than ridicule her, his opinion of her increased and he began to wonder if there was something in the nonsense that was love after all.

When visiting his favorite house of ill repute, run by a Baron, he is accosted by a woman. He is begged for help in escaping from the house. Whether it was the real fear in her voice, or whether it was the devil in him, he helped her. Suddenly his life was to become far more complicated.

Protecting an innocent, employing the services of Bow Street and racing across country, all situations that he could never have anticipated when he was first sought out by Miss Charlotte Webster.

His life was never going to be the same again.