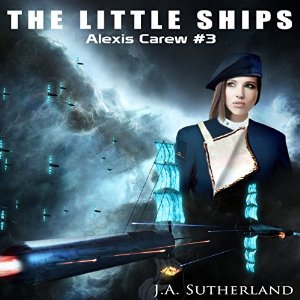 Elizabeth is excited to announce the release of The Little Ships, the third book in the Alexis Carew series by J.A. Sutherland. This book is now available at Audible, where you can listen to an audio sample. Elizabeth has also narrated the other two books in the series – Into the Dark and Mutineer – and will be narrating a novella set in the same world early in 2016.

Newly commissioned lieutenant Alexis Carew is appointed into HMS Shrewsbury, a 74-gun ship of the line in New London’s space navy. She expects Shrewsbury will be sent into action in the war against Hanover, but instead she finds that she and her new ship are pivotal in a Foreign Office plot to bring the star systems of the French Republic into the war and end the threat of Hanover forever.