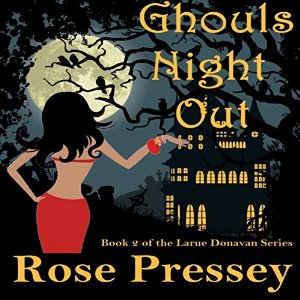 Elizabeth has a new release for you today: the second book in the Larue Donavan series by Rose Pressey – Ghouls Night Out, which is now available at Audible. The first book in the series, Me and My Ghoulfriends, was released in September and has garnered some great reviews, including this one by April Holgate at Eargasms Audiobook Reviews.

Larue Donavan is a bookstore owner by day and psychic medium ghost buster by night. Just when she thought she’d gotten rid of the pesky ghosts following her, a new ghostly entourage has appeared. Her new group of ghoul friends includes a celebrity…the ghost of Mae West. And does Mae ever have dating advice for Larue!

When a stranger shows up in Magnolia, Kentucky, things take a turn for the worse. Larue’s new love interest, Callahan Weiss, barista extraordinaire, isn’t sure if Larue is interested in what he’s got brewing. Something weird is going on in town and Larue’s best friend, Mindy, is in danger. Has a demon followed Larue home from an investigation? Is the new man in town to blame for the strange occurrences? Not only is Larue trying to save Mindy, but the coven leader wants Larue to use her new spellbinding talents and become a full-time witch. Larue’s not sure she’s ready for her new paranormal gift, though. If Larue doesn’t find the source of the evil soon, she may lose all she holds dear.