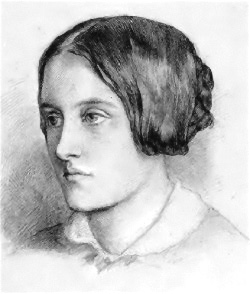 Elizabeth has just released a new LibriVox solo recording: Maude by Christina Rossetti. This novella was written in 1850 but published posthumously in 1897. Considered by scholars to be semi-autobiographical, the protagonist is 15-year-old Maude Foster, a quiet and serious girl who (like Rossetti herself) writes poetry that explores the tensions between religious devotion and worldly desires. The text includes several of Rossetti’s early verses, which were later published as part of her collections of poetry. Elizabeth has also recorded one of those collections for LibriVox as a solo: Goblin Market and Other Poems. The title poem of that collection is perhaps Rossetti’s most famous work: a creepily sensual tale of two sisters who are tempted by forbidden fruits.